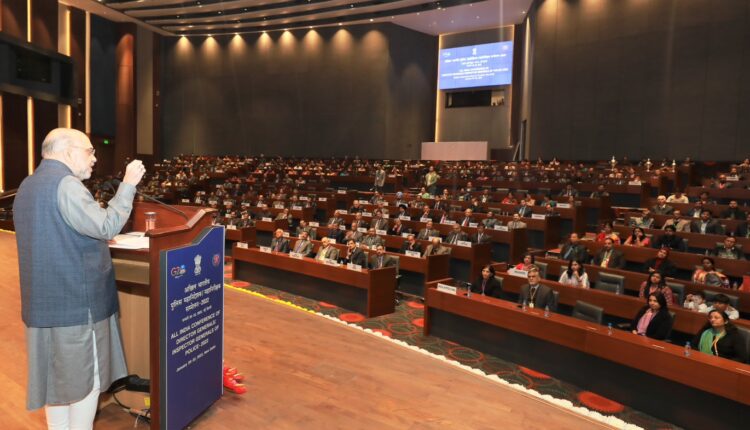 The 57th DGsP/IGsP Conference was inaugurated by the Hon’ble Union Home Minister Amit Shah on Friday at National Agriculture Science Complex, PUSA Campus, New Delhi. DGsP/IGsP of all States/UTs and heads of the CAPs are attending from New Delhi. Organised in hybrid mode, approximately 600 officers of various levels are attending virtually from various States/UTs.

India under the leadership of Prime Minister Narendra Modi is no longer a nation that can be ignored and tied back, said Honorable Union Minister of Home and Cooperation Amit Shah on Friday addressing the three day DGPs/IGsP Conference in New Delhi.

“We have to remember that the entire world has now accepted the fact that India can no longer be tied back. In a recent report, Morgan Stanley has said that by 2027 we will become the world’s third largest economy,” he said.

He further said, “I am not saying this on the basis of the survey alone but on the basis of our track record. In 2014 our economy was 11th largest in the world and we had remained in the same status in the decade prior to it. But within the period starting from 2014 to January 2023 we have jumped from 11th to 5th position.”

Lauding the effort of the security agencies he said, “So far in the question of internal security, we have been successful in maintaining peace in the country by and large despite many odds. I congratulate all of you for your efforts to strengthen the security apparatus. All the police forces, paramilitary forces and central agencies have responded promptly in the challenging times, which has also been appreciated by the citizens.”

Earlier there was a time when children from Jammu and Kashmir used to leave their homeland to pursue studies. But today 32,000 children from different states are studying there which has enhanced the trust of the people there and also that of the nation.

Year 2022 broke all the records of tourist football in the region, the total number of tourists stood at 1.80 crores, which shows that the entire nation is convinced that peace is returning to the region. “I congratulate Jammu and Kashmir Police, CRPF, BSF, IB, RAW as their efforts are slowly bearing fruit,” he added.

Detailing the success achieved in Northeast he said, “In Northeast India, 9 different types of groups have surrendered and signed peace accords and have returned to the mainstream. More than 9,000 insurgents that donned guns earlier now have surrendered and handed over weapons to authorities. Three border disputes among the states in the region have been resolved and I can claim with immense faith that when we will sit together in the next year the remaining four disputes will also stand resolved.”

He further added,”We have removed AFSPA from 30% of the area in the region. We have not done this to fulfill any political demand. We have assessed the situation and removed it after we found it normal. It shows that there is increasing peace in the region and a steep decline of more than 42% in violence has been witnessed.”

Attributing the success to the Prime Minister he said, “Given Prime Minister Narendra Modi’s zero tolerance policy on terror we have strengthened the anti terror laws, fortified the agencies, conviction rates have increased. NIA has done commendable job here.

He also said, “We have attained massive success in taming left wing terror. In 2010 there were 96 terror affected districts now there are only 46 districts left. Similarly, 72% of the security vacuum has been plugged and I have complete faith that by 2024 we will plug 100% vacuum and take absolute control of the situation. In left wing affected regions also all kinds of violence witnessed 40% to 60% decline.”
Stating the success of India in containing the PFI menace he said, ” All the states cooperated in nabbing the PFI culprits, It shows the power of India’s cooperative federalism and maturity as a democracy where we can be on the same side on issues related to security.”

He also appealed to the police chiefs of the states to make efforts to increase police housing satisfaction ratio. He further added that the police have to cope up with the changing times as now issues have become thematic and multi-dimensional.

“Earlier problems were geographical like unrest in northeast, terrorism in J&K, LWE affected areas but now they are thematic like cyber security and Data security. The problems also have become multidimensional as narco terror and fourth generation war have chipped in,” he said.

He also said that policing now has to focus more on urban policing, capacity building, police technology, critical infrastructure security and securing digital goods. He congratulated NIA for achieving highest conviction rate in the world and the Delhi Police for making forensic investigation compulsory for cases with a sentence of more than 6 years, he urged all states to adopt the same.

UHM distributed Police Medal for meritorious service and gave away trophies for the top three police stations of the country. On the first day, the Conference deliberated upon topics such as security challenges along the Land Borders with Nepal and Myanmar, strategies to identify overstaying foreigners in India and targeting of Maoist strongholds. Over the next two days, top police leadership of the country would deliberate on emerging security challenges and opportunities along with experts, field functionaries and academia.