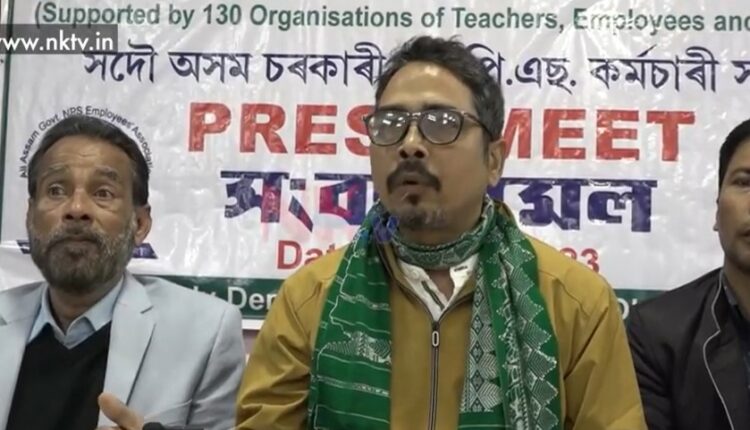 The present government is said to be a public welfare, reform oriented and development oriented which has not been proved in the case of the Govt. teachers- employees. The state government employees are worried about their future financial poverty after retirement. The 9,000 teachers and employees who have retired under the NPS are before everyone’s eyes. The demand for restoration of Old Pension System made by more than 30,000 peoples on behalf of the work force of Assam Govt. on November 8, 2022 seems to have been treated as insignificant like other requests. Today, the working class of Assam is determined to ensure its future security interests. We are now ready to unite and fight until the OPS are restored. As 99% part of the Govt. machinery, we demand the goodwill of the government. If we are expected to do 100% work and efficiency, our demands must be given proper weight. Teachers, Employees of Assam will observe Black Day on 1 February 2023 and a one-day strike on 10 February 2023 demanding restoration of Old Pension System in the state.” Sri Achyutananda Hazarika, President of All Assam Government NPS Employees Association said this in a press meet hold in association with other teachers, employees association today in the Guwahati Press Club premises.

Government employees are an integral part of the society and the administration system. They have made the state and the country progress. They have been working mainly for the upliftment of society and the civilization as a whole. The government must take responsibility after their retirement. This is dictated by the civilization and culture of India. The officers, teachers, police and employees of Assam had been taken to a dark future through the NPS system which is against Indian heritage, civilization and culture. Therefore, the government should immediately abolish the NPS system and secure the retirement of all teachers, officers, police and employees of Assam through the old pension system. The governments of Rajasthan, Chhattisgarh, Jharkhand and Punjab as well as Himachal Pradesh have already restored old pensions to give justice to the employees of these states. Today, it is clear that the retirement security of the employees depends on the will of the Government of Assam.

It is worth mentioning that a march was organized on 8/11/2022 demanding scrapping of the NPS system and restore the old pension system and remove other retirement difficulties. Despite intense pressure from the administration, more than 30,000 teachers, officers and employees gathered at Khanapara demanding the government to resolve the issue. It is regrettable that the government has not taken any positive steps on the demand despite the Hon’ble Chief Minister of Assam personally expressing his sympathy to the organization and advocating dialogue on the issue. The employees are unhappy with the government’s recent role. We seek an immediate positive response from the Government of Assam in the interest of the working class of Assam. We have decided to launch a strong democratic movement as the attitude of the government towards the demands of the working class of Assam is not satisfactory at all. The state employees will continue their agitation until the government cancels the NPS system and reintroduces the old pension system.

Felicitation to Gallantry awardees on the eve of Republic Day