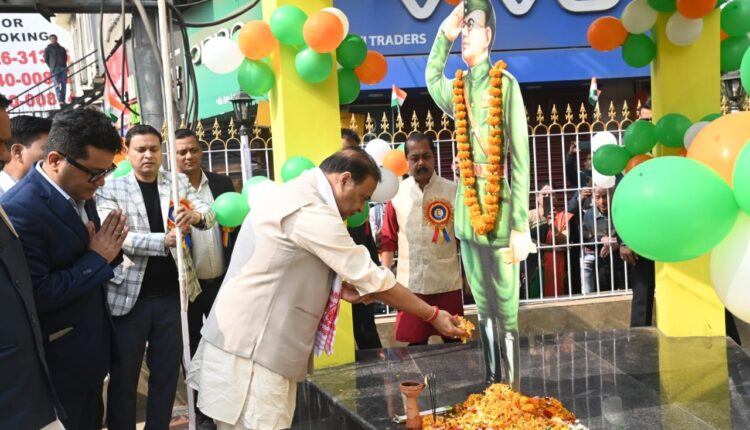 Speaking at the occasion, Chief Minister Dr. Sarma said Netaji Subhash Chandra Bose as a personality symbolised patriotism and nationalism of the highest order and that his contributions towards the nation’s freedom struggle were immense and incomparable. Stating that the contributions of Netaji towards India’s freedom struggle were either consciously or subconsciously downplayed by a section of the intellectual circles and contemporary historians, Chief Minister Dr. Sarma said Prime Minister Narendra Modi has been relentlessly trying to undo such historical wrongs through initiatives such as installation of the 28-feet tall black-granite statue of the Indian National Army (INA) Commander-In-Chief near the India Gate.

Crediting Netaji Subhash Chandra Bose for taking the issue of India’s demand for independence from colonial rule to areas far beyond the perimeters of the Indian subcontinent, Chief Minister Dr. Sarma said Bose’s indomitable spirit and aspirations to see his motherland become free again drove him to take up unimaginable dangerous tasks and missions. The ideals of patriotism, nationalism and that of nation-first displayed by Netaji continue to inspire millions of Indian citizens in dedicating their lives to the welfare of the nation, the Chief Minister added.

The Chief Minister also showered praises on Subhash Chandra Bose for his role in preserving the cultural and political hegemony of the indigenous communities of Northeastern India countering designs of altering the demography of the region by certain quarters with vested interests.

Using the platform of the Netaji birth anniversary celebration, Chief Minister Dr. Sarma appealed to the youths of the State to imbibe the ideals of Netaji and work towards the process of nation-building. Netaji had immense faith in the capabilities of the youths in transforming the world and the society, the Chief Minister said, exuding confidence Assam younger generations would make best use of their potential and abilities in their respective fields of expertise.

ASSAM : Men marrying girls below 14 to be booked under POCSO Act