Rise of Aainball sport in Assam catches eyes of youths 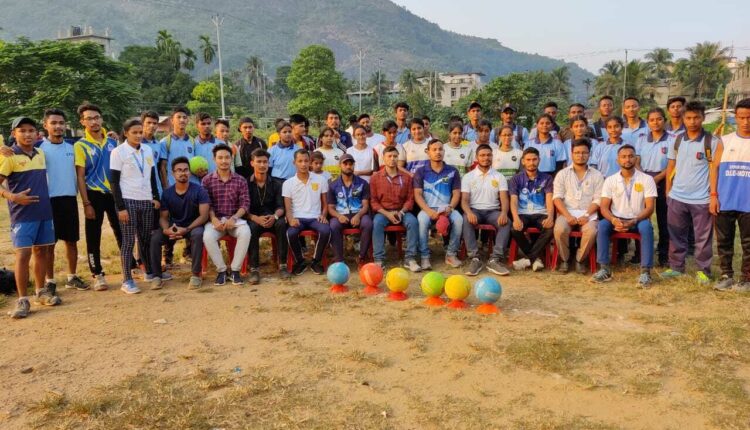 Aainball, a new sport is on the rise in the state of Assam with more youngsters getting attracted to the game. The game has garnered a good amount of popularity in Assam with the state team participating in the national championships later this year. But before getting into details, readers should know what Aainball is and how it is played.

According to Aainball Federation of India-

It’s empirically proven that colors have a stimulating power on the brain and can help stimulate the learning process, In light of this; Mohamed Hamane conducted an in-depth study on colors and studied their impact by compiling and synthesizing different recent researches. In today’s time, colors are being used as an effective means to achieve targeted responses and to influence the behaviors of the prospect. Entailing a similar notion, Hamane thought of designing a game that combines prominent colors and a sport that involves all parts of the body and various sets of skills. Yoti Foundation has taken an initiative to promote this unique game in India and profusely structure the Aainball Federation of India.

How the game is played (As details given on Aainball Website)

Aainball is an International Game played Physically on Playground. This game is based on Colours, Concentration, and Coordination. This manual has been designed to provide a detailed description of the Aainball sport, a step-by-step illustration of the different sequences of the game. The objective is to standardize the learning process enabling coaches to find clear guidance about how to lead new players into understanding and mastering the rules of the game. Like any sport, adequate physical preparation has to be ensured on regular basis to keep players fit. Additionally, as Aainball sport combines features of many sports like soccer, handball, and Athletics, coaches need to master a set of fundamentals that will benefit the players. For example, a coach with a soccer background will incorporate many soccer techniques in his/her program. He/she can show the players how to make and perfect a head kick or a foot kick whereas a coach with a basketball record will rather focus on the techniques of shooting and scoring by hand. The ideal coach would possess broad sports knowledge and experience. He is able to help work on a specific movement and be comfortable with it. Before the game, some warm-up exercises have to be accomplished that involve running, the stretching of the neck, the legs, the shoulders, the arms, and the feet as these body parts are heavily solicited. Coaches are also animators who arouse enthusiasm, motivate, cultivate team spirit and monitor the performance of their teams in order to adjust their training programs.

The game Aainball is a growing sport and needs support from sports enthusiastic so that the game gets into every household. The game is yet to be recognized as an Olympic sport but the popularity it has been getting in Western parts of India and now in Assam and Northeast is commendable.