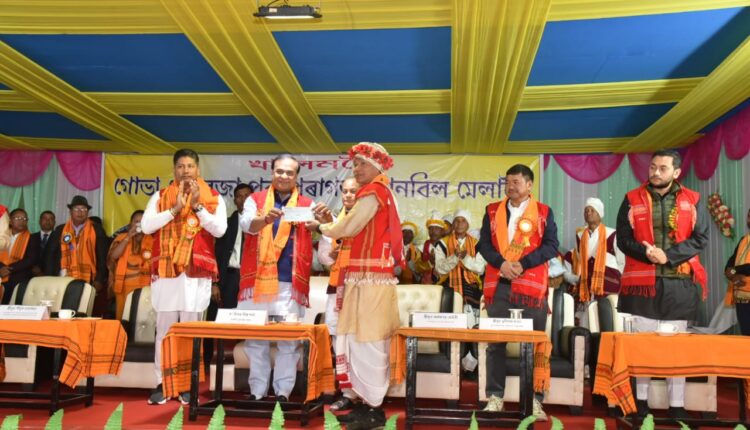 Jonbeel Mela a Platform for Interaction & Removal of Prejudice Between Communities: CM

Assam Chief Minister Dr. Himanata Biswa Sarma on Friday attended the second day of the three-day historic Gova Deoroja Jonbeel Mela at Jonbeel Pothar in Morigaon district. Tiwa monarch Gova Roja Deep Singh Deoroja, along with the rulers of the other Tiwa “kingdoms”, were also present today. Best known for the practice of barter system of trade between communities of the hills and the plains of the nearby and adjoining areas, Jonbeel Melahas traditionally been patronised by the Tiwa royal families for centuries since the medieval period.

Addressing a public meeting at the Jonbeel Mela venue, the Chief Minister referred to the traditional fare as one of the most distinct cultural practices of the State owing to its peculiarity such as the barter system of trade, collection of taxes and holding of royal assembly the Tiwa monarch Gova Roja, practices commonly not observed in any other contemporary events. Chief Minister Dr. Sarma also credited the tradition of Jonbeel Mela for providing a platform for interaction between various ethnicities of the hills and the plains. These interactions gradually led to growth of brotherly relations and removal of prejudice between various ethnic communities, the Chief Minister added. The continuation of the Jonbeel Mela in its original form for centuries was a manifestation of the importance the members of the Tiwa community attaches to their heritage and culture, Dr. Sarma remarked. The Chief Minister also said the central reason behind holding the Jonbeel Mela was economic, and that it was still serving that very purpose, apart from being a platform for spread of peace and brotherhood between communities. The Chief Minister also handed over “Raj Bhatta” to the Tiwa kings.

Assenting to a long-standing demand of members of the Tiwa community, the Chief Minister also declared that 20 bighas of land at an appropriate location would be allotted to the Jonbeel Mela committee at the earliest so that the tradition can be practiced from next year onwards at that location.

Chief Minister Dr. Sarma also made an appeal to the members of the tribal communities to get their land registered in their names under the Basundhara 2.0 scheme, which allows tribal individuals to possess as much as 50 bighas of land under their names. The Chief Minister also made an appeal to the Tiwa population to remain rooted to their and culture and identity and maintain a safe distance from the trend of religious conversion as has been seen in recent times. He said an ethnicity cannot thrive for long if it loses its touch with its cultural roots.