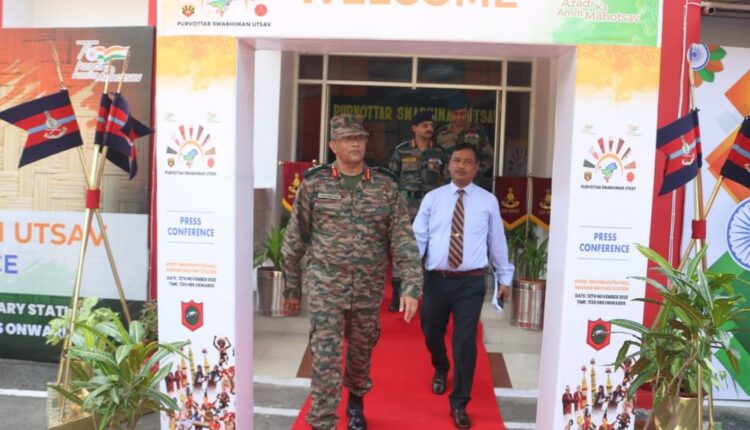 The vibrant North Eastern States of the country have made noteworthy and significant contributions towards overall nation building. As a part of Azadi Ka Amrit Mahotsav (AKAM) celebrations, Indian Army, under the aegis of HQ Eastern Command is organising a two day Conclave on the theme of ‘Celebrating Contribution of India’s North East Region (NER) in Nation Building’ on 20 & 21 Nov 2022 at Guwahati with an aim of highlighting contribution of NER towards nation building, felicitate Veer Naris and showcase NE culture.

This prestigious Conclave will be an apt opportunity to spread awareness about role of unsung heroes of NER in India’s independence struggle, contribution of the Indian Armed Forces and other important organs of the Government like North Eastern Council (NEC), Border Roads Organisation (BRO), Assam Rifles and Northeastern Frontier Railways (NFR) towards overall development of NER, promote integration of NER as also further cement Civil- Military relations.

It is the first time that such a unique event has been conceived and the mega event is being supported by the State Governments of Assam, Meghalaya, Arunachal Pradesh, Tripura, Mizoram, Manipur & Nagaland as also North Eastern Zone Cultural Council (NEZCC). The program highlights include a Panel Discussion at Assam Administrative Staff College, Guwahati on 20 Nov 2022 in which eminent personalities to include Honorable Chief Ministers of Assam, Manipur and Meghalaya and renowned speakers from Indian Army, NEC, NFR and civil society will deliver illuminating talks on contemporary issues of great relevance.

As a part of the celebrations, the brave Veer Naris of NER would also be felicitated during a special event on 20 Nov 2022 at Narangi Military Station. About 100 Veer Naris are expected to attend the first of its kind outreach program. On 21 Nov 2022, a mega event would be organised at Indira Gandhi Athletic Stadium, Guwahati, which would include weapons/ equipment display and adventure activities display by Armed Forces, fusion band concert, medley of cultural performances from NER, special performance by local pop bands, an extravagant musical theatrical it would be followed by the first ever Drone Show at Guwahati. This mega event will be a fitting tribute to the indomitable spirit of the people of NE and symbolise a perfect synergy amongst all stakeholders in NER.

Even in the age of social media, good books continue to receive appreciation from readers: Ruskin Bond