How Assam Celebrates the Yoga Day 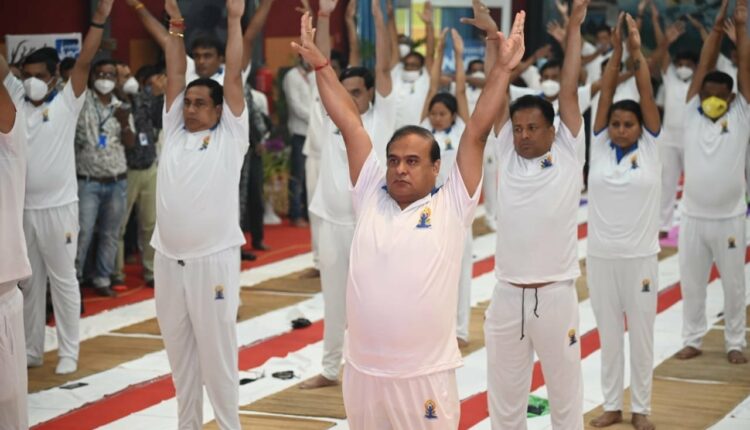 Yoga for wellbeing, for balanced mind and body: CM

Guwahati, June 21 (NKTV): Assam also joined the rest of the country in celebrating the 7th International Day of Yoga as he led the state in celebrating day with a flurry of activities across the state. On this occasion Chief Minister Dr Himanta Biswa Sarma took part in a yoga session along with Education Minister Dr Ranoj Pegu, Tea Tribes Welfare Minister Sanjay Kishan, MP Pradan Baruah, MLA and Political Secretary to the Chief Minister Jayanta Malla Baruah, MLAs Bhubon Pegu, Naba Kumar Doley, Manab Deka and Rupjyoti Kurmi in the serene campus of NHPC at Gerukamukh in Dhemaji district today.

Speaking on the occasion, Chief Minister Dr. Sarma said that it is really heartening to see that amid Covid 19 pandemic, people in the state have responded positively in celebrating the day. He also said that yoga which is India’s invaluable contribution to the world boosts immunity, energy and positivity. Moreover, this immunity, energy and positivity which are manifestations of yoga helped the people tremendously in fighting against the Corona virus, the Chief Minister added.

Dr. Sarma also urged upon every family to make yoga a daily practice of their life. He also said yoga develops balanced mind and body and helps in taking correct decisions which are beneficial for the society. The Chief Minister said that under Assam Yoga Prakalpa, yoga centres have been established in development blocks all over the state.

He also said that declaring and celebrating the 21st June every year as the International Day of Yoga is tantamount to the fact that the benefits of yoga have been accepted by the entire world today. The Chief Minister appreciated Prime Minister Narendra Modi for his role in taking yoga to international level.

After AP Tiwari, it is Asif Ahmed in ASTC Corruption spree