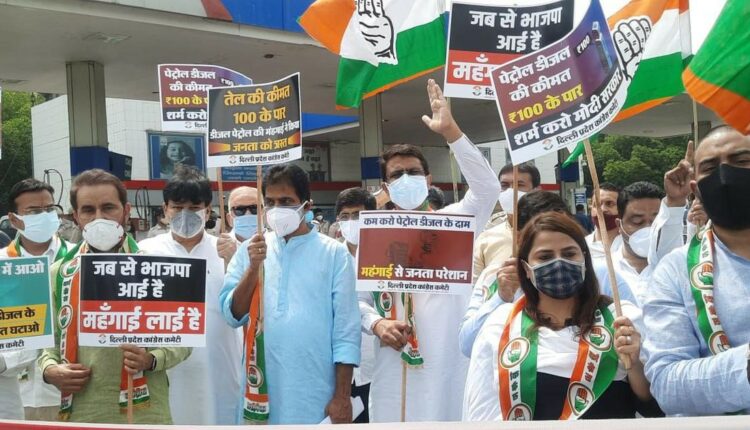 Under BJP Government, there has been a consistent hike in fuel prices in the last couple of months in India. The price of petrol and diesel are at an all-time high. The price of Petrol has crossed Rs 100 in 135 cities across India. In the last six months, retail prices of petrol and diesel have risen by Rs. 10.78 per litre and Rs. 11.51 per litre respectively. The prices of petrol-diesel have gone up 21 times since May 4, and 43 times in the last five months. It is pertinent to note that the taxes levied on petrol and diesel in India are among the world’s highest. The government’s tax collections on just petrol and diesel alone have increased over 300% in the last six years. The excise duty on petrol and diesel together in 2014-15 was
around Rs. 72, 160 crores (Rs. 29, 279 crore for petrol and Rs. 42, 881 crore for diesel), and shot to Rs. 2.94 lakh crore between the first 10 months of FY21 (i.e., Apr 2020 – Jan 2021). The share of taxes collected on petrol, diesel and natural gas as a percentage of the government’s total revenue has risen from 5.4 % in FY15 to 12 % in FY21.

Assam NSUI President Krishanu Baruah stated “The Modi government’s policy of levying cess and surcharges deprives Petroleum producing states like Assam from their share in revenue as these are not shareable with states. Under the Modi government, there has been an increasing reliance on indirect taxes (i.e., including cess and surcharges). The price hike is having a cascading impact on the essential commodities as the cost of transportation is rising dramatically. This is only going to exacerbate the already slumping economy. For the state of Assam, it is an attack on triple front as the annual monsoon season along with lockdown has all caused tremendous price rise and inflation of essential goods in the state.” He further added that NSUI workers protested across the state as people and their livelihoods are at stake.

Today, Petrol sells at Rs. 91-93 across the state of Assam. This is unthinkable for a state which produces oil and should have been at par with Dubai in terms of development; and yet Assam could never take advantage of its most precious resource. It is one of the poorest states in India thanks to the policies of the BJP Government of taking in state debt, year after year, and now with price rise, it is further damaging the sustenance of Assamese people in these tough times.