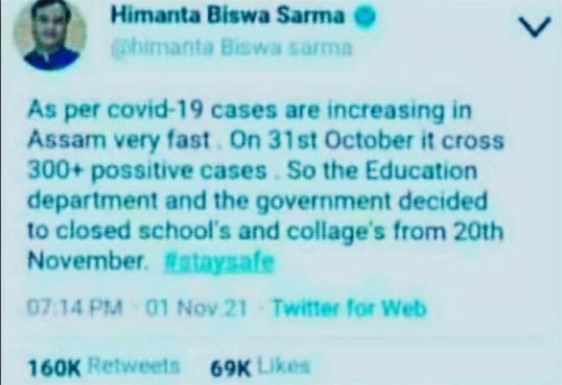 The chief minister of Assam Himanta Biswa Sarma has cleared the air on the fake announcement that surfaced on various social media outlets which stated schools and colleges in Assam will be closed from November 20 due to Covid-19.

The chief minister tweeted ” A FAKE tweet bearing my name is circulating saying that since cases of #COVID19 have gone up schools & colleges are being closed down from Nov 20. This is WRONG & should not be heeded to. Stay off misinformation and fake news! I am advising @assampolice to take note and act.

Himanta Biswa Sarma has also directed the Assam Police to take stringent action against the mind behind the fake news publisher.