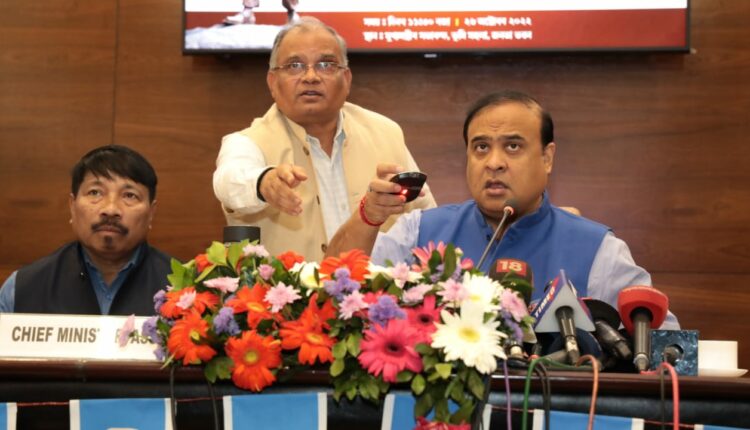 The mobile application/portal has been designed so as to provide a platform to the general public residing in Assam and beyond, including foreign countries, to pay their richest tributes to the great Ahom army general on his 400th birth anniversary in the form of write-ups and essays. Open for use by the public from today itself, the mobile application will be available for use in both Android and iOS operated phones. Residents of India can sign-in to the portal through a one-time password (OTP) that will be generated on their mobile phone number while those residing abroad can do the same through an OTP that would be sent on their e-mail.

Speaking at the event, the Chief Minister stated that the aim of the portal is to ensure the 400th birth anniversary celebration of Lachit Barphukan, whom he termed one of the ablest sons of Mother Assam, witnesses the participation of majority of the population in Assam and beyond and that the ideals of patriotism, love for the motherland, as was displayed by the Ahom army general, are imbibed and practiced by the participants.

Elaborating on the plan, the Chief Minister said a mass movement will be built up around the upcoming birth anniversary celebration and the people from all walks of life would be encouraged to express their opinion/pay their tributes and respect to Mahavir Lachit Barphukan through the means of short write-ups, essays. The write-ups, essays can subsequently be uploaded on the portal, following which an acknowledgement certificate from the government of Assam, bearing the signature of the Chief Minister, would be provided to the participants in the portal itself, Dr. Sarma added. The Chief Minister stated that a participant will have the option of writing either on any piece of paper or on a pre-formatted booklet that can be downloaded from the application/portal, printed-out and once the write-up is complete, can be scanned and uploaded to the application/portal. This apart, there is also the option of typing the write-up on the portal itself, the Chief Minister added. Dr. Sarma further added that from coming November 18, a total of 1 crore pre-formatted booklet of 2 pages each in physical format will be distributed across the State by the district administrations within their respective jurisprudence. It would be helpful in reaching out to those unable to participate in the initiative owing to reasons such as lack of technical know-how, poor internet connectivity, lack of smartphone, etc, he said.

The Chief Minister further declared that on November 18, all schools, colleges and universities of the State will hold essay competition with Lachit Barphukan as the subject among the students within their respective educational institutions. Best writings will be awarded at district and state level after subsequent selections, the Chief Minister added. Each and every writing by the students would be uploaded on the portal, the Chief Minister stated. Also, on that same day, Assam Police shall organise march-pasts in every district as a mark of respect towards the display of valour by Lachit Barphukan during his tenure as the commander of Ahom army. Moreover, from November 18, district administrations will organise week-long cultural, sporting and other events such as speeches by eminent personalities on 600 years of glorious Ahom rule, among others.

The Chief Minister also spoke about the preparations for the two-day celebration of 400th birth anniversary of Lachit Barphukan in Delhi, the national capital, starting November 23. He said a grand seminar at Vigyan Bhawan in Delhi has been scheduled for November 23, during which the Government of Assam is all set to release a book and a documentary on the life and works of the great general of 17th century. He further added that on November 24, the day of conclusion of the year-long tribute to Lachit Barphukan, Prime Minister Narendra Modi and Union Minister of Home Affairs Amit Shah were likely to grace the central celebration at the national capital with their presence.

It is worth mentioning that a year-long celebration of Lachit Barphukan’s 400th birth anniversary was formally launched by the then President of India, Ram Nath Kovind on February 23 this year. Since then, numerous programmes aimed at showcasing the contribution of Lachit Barphukan in ensuring the sovereignty of the Assam in the mediaeval period remained intact have been highlighted and showcased.