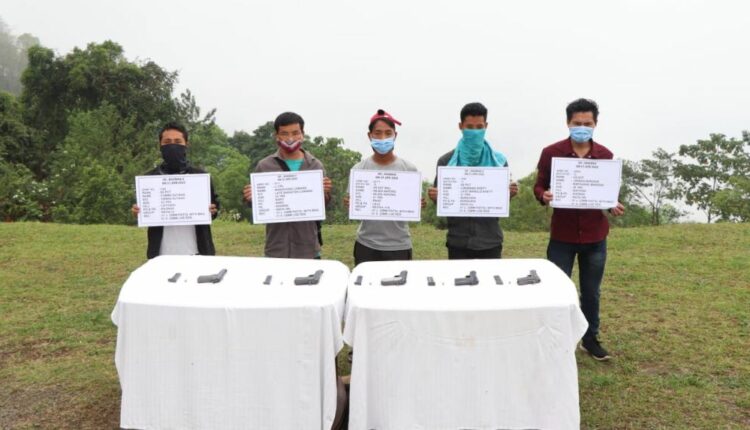 On 1st April 2022 in a major achievement in the insurgency affected TCL region, five hardcore insurgents of various groups including two Self Styled cadres from NSCN (IM), two from NSCN (U) and one from NSCN-K(YA) surrendered before a team of 6th Assam Rifles and Tirap Police alongwith five pistols and ammunition.

In view of the various successful operations carried out by 6th Assam Rifles and Tirap police with the support of local population there has been steep downfall pertaining to insurgent activities in entire Tirap region. The recent operation where a gun battle broke out between security forces and NSCN (IM) cadres at Kolagaon, in which one civilian was injured due to being used as a human shield by the insurgents had outraged the public of Tirap resulting in various protests being organised against the banned underground outfit. As per the surrendered cadres these atrocities by underground outfit towards the local population, motivated them to lay down arms and join main stream to show their support against the inhuman activities of underground outfits.

Earlier also more than fifty important insurgent leaders and cadres have shunned the insurgent groups and joined the mainstream giving a huge blow to the underground outfits. This trend is reflective of the growing disgruntlement and lack of ideology amongst the cadres and has ushered normalcy and peace in the region. This achievement showcases the commitment of Assam Rifles and Tirap Police to ensure peace, normalcy and safe environment in the region. The surrender of cadres is likely to motivate other cadres of various groups to join the mainstream in future and further weaken the underground organisations.

Peace talks between Russia and Ukraine held in Istanbul