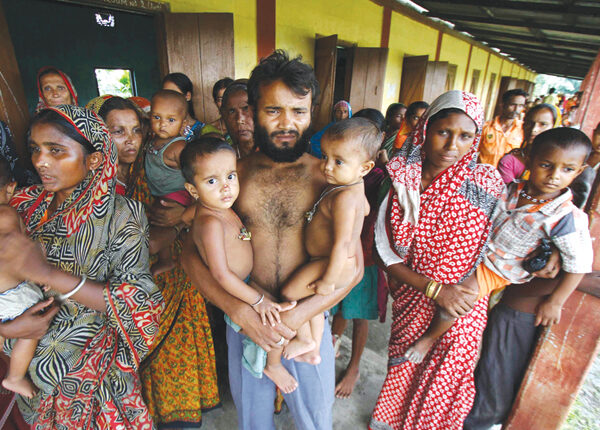 ABMSU is anguished, disturbed and concerned of the majoritarian politics of the BJP government which is demonizing the over one crore Muslims of the state every day. The BJP leaders are not only spreading hatred on a daily basis but also abuse the Muslims in the media and social media. This government and their action is totally anti-minority which is further isolating the Muslims, one of the most marginalized and backward community in Assam.

The majoritarian Assam government has evicted over 4,449 families, mostly Muslims, making them homeless since Himanta Biswa Sarma became the chief minister in May last year as per the state assembly data. The government has neither given any alternative land to the evicted nor any kind of government help. Most of the victims belong to the marginalized Muslim community. Some are still living in the makeshift huts in dire need of essentials.

The evicted people are erosion affected, lost their lands in erosion and floods forcing them to live on the government lands for ages. According to Government data, from 1954 to 2007 about 2.8 million bighas of land in Assam was lost to erosion.

The “Right to Shelter” is a fundamental right guaranteed by the Constitution of India. Being a welfare state, the state is duty bound to give shelter to each and every landless citizen. But, the Assam government has been carrying out random evictions of landless people, more particularly belonging to minority Muslims, making them roofless and shelterless. This violates the basic human rights of the people, reflecting the anti-minority attitude of the government.

In Darrang district in 2021, two persons were shot dead by Assam Police including a 12-year-old child during eviction. The premier investigation agency Central Bureau of Investigation has not abled to arrest any accused in relation with the killing of former ABMSU president martyr Lafiqul Islam Ahmed even after five years of his assassination. Lafiqul Islam Ahmed was shot dead by miscreants in Kokrajhar on August 1, 2017. We urge the Centre to apprehend the culprits and take necessary steps for startig Fast Track Trial.

The recent demolition of Madrassa is another attack on the religious identity of Muslims living in the state. All kinds of anti-national activities should be stopped and any kind of Anti-India act should be dealt with by the law of the land. Demolishing madrassa without following due process of law in the pretext of ‘Jehadi’ activities is nothing but violation of fundamental rights of minorities guaranteed by the Constitution of India. This arbitrary act of the government is politically motivated to create a fear psychosis among the Muslims.

The NRC process which is in limbo since the publication should be taken to logical conclusion by notifying it. The RGI should notify it without further delay.

The poor Muslims and Hindus are being harassed in the name of D-Voters and Foreigners Tribunal cases which doesn’t follow any process of law. The FTs run in a very arbitrary manner in the state. Citizenship is the most precious right of any individual and we demand to take necessary steps to stop random harassment to the genuine Indian citizens in the name of D-Voters, Foreigners Tribunal by Border Police of Assam Police.