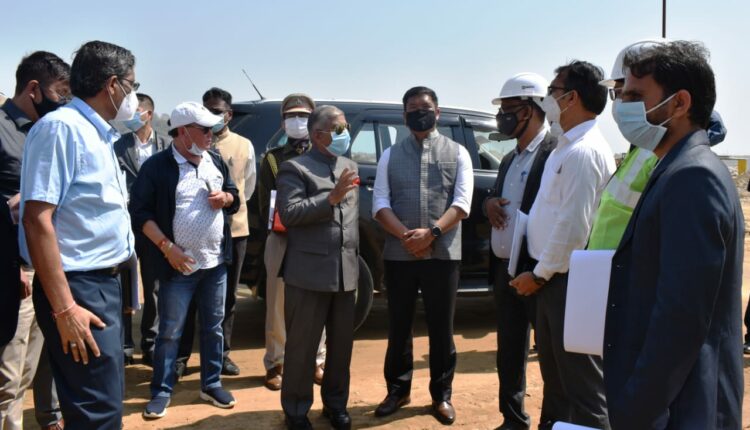 The Governor emphasised that every component builder should realize the pressing need, the urgency and the necessity to finish the project at the earliest. He advised the project managers and officials for weekly reporting and monitoring for all components of the airport and to take immediate actions to expedite the progress of the work.

The Governor suggested for involvement of local MLAs and district administration to address the public grievances, administrative bottlenecks and accelerate the work.

The Governor exhorted the officials to work with the spirit of ‘We will do it’ and accomplish their mission. The Chief Minister thanked the Governor for his constant monitoring and inspection of the project and said that it has to be made operational by 15 August 2022. He called for priority clearance by the AAI and Bureau of Civil Aviation Security (BCAS).

Chief Secretary Naresh Kumar, IAS and AAI Regional Executive Director Ravi Kant briefed the Governor and Chief Minister about the status, progress and timeline of the works completion. Civil Aviation Secretary Swapnil M Naik, IAS mentioned about the progress of peripheral works, while the State Security Advisor Major General SC Mohanty, AVSM (Retd.) highlighted the details of the security requirements, including the manpower selection, their training, their affiliation for job familiarization and the security personnel’s availability.

Huge cache of arms and ammunition recovered in Kokrajhar