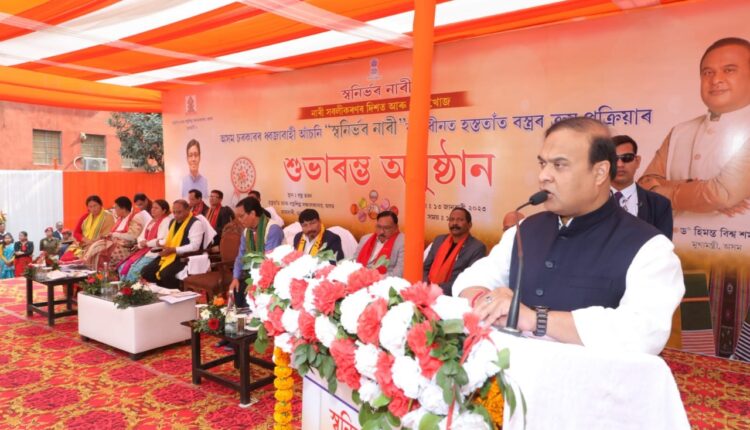 Grateful to PM Modi for Popularizing the Assamese Gamusa Across the Country & the Globe: CM

Assam Chief Minister Dr.Himanta Biswa Sarma on Friday attended as Chief Guest the formal procurement of hand-woven items under the Directorate of Handloom & Textile’s “SwamirbharNaari” scheme, aimed at empowerment of indigenous weavers of the State.

Through this, direct procurement of hand-woven items by the government agency would be taken up without involvement of any middleman. Around 4.8 lakh female weavers from across the State have registered their names on the portal swanirbharnaari.assam.gov.in and shall be selling their produces across 100 procurement centres being set up for the purpose.

Addressing the launch ceremony at the premises of the Directorate of Handloom & Textile at Ambari in Guwahati, Chief Minister Dr.Sarma exuded confidence the initiative to procure hand-woven items directly from the weavers would prove decisive in protecting the traditional handloom sector of the State from the onslaught of the powerloom industry. Referring to Gandhi’s famous quote, “Assamese women weave dreams on their looms”, Chief Minister Dr.Sarma said the handloom sector, which he referred to as an art representing the Assamese cultural identity, has been suffering immensely owing to the markets being flooded with cheaper products produced in powerloom. Stating that there were massive markets for Assam-made handloom products in the domestic as well as the international markets, the Chief Minister expressed hope today’s initiative would help the handloom sector of the State gain an upper hand over the powerloom industry. He added “SwamirbharNaari” would provide a sense of economic security to the weavers, as it guarantees assured return on their investments in time and resources.

Referring to the Centre’s Handloom (Reservation of Articles for Production) Act of 1985, which bans the manufacture with powerloom of 11 items, as well as their sale, and whose production have been reserved for the handloom sector alone, Chief Minister Dr.Sarma said the current regime in the State would ensure the law of the land on handloom are ruthlessly enforced and any violations, pursued in equal intensity. Government agencies would launch a campaign to ensure production of items reserved for the handloom sector are not produced by the powerloom industry, he added.

The Chief Minister also expressed his gratitude towards Prime Minister Modi for popularizing the Assamese hand-woven gamusa by using the same in various official ceremonies across the country as well as abroad.

The granting of Geographical Indication tag to the gamusa would also provide a great impetus to popularization of the Assamese gamusa, he said.

During his speech, the Chief Minister also touched upon the subject of royal dynasties such as the Ahoms patronizing hand-woven gamusas and similar items. He also spoke about the mention of the weaving tradition within the present-day geographical boundaries of Assam during the visit of Chinese traveller Huen Tsang to the region, as can be corroborated from his writings.