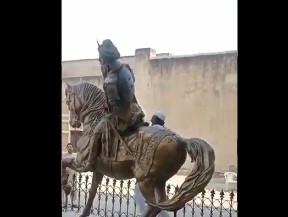 Guwahati, August 17 (NKTV): An worker of Tehreek-e-Labbaik Pakistan (TLP) was seen pulling down the statue of Maharaja Ranjit Singh at the Lahore Fort in Pakistan.

Minister of Information and Broadcasting, Pakistan, Ch Fawad Hussain shared a video of the same on Twitter and stated that the incident is shameful. “This bunch of illiterates are really dangerous for Pakistan image in the world” he said.

It may be mentioned here that TLP workers had vandalized the statue on earlier occasions too, at least twice.

Maharaja Ranjit Singh was the first Maharaja of the Sikh Empire.

11% of Assam’s population has received both doses of vaccination