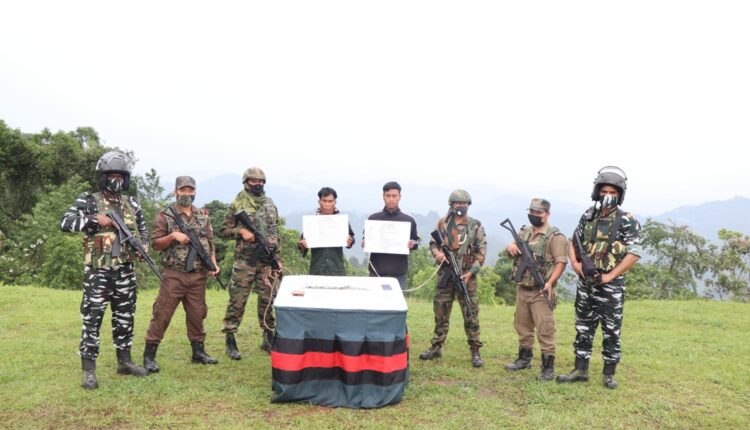 In a major achievement in the insurgency affected TCL region, two over ground workers of National Socialist Council of Nagaland- Khaplang (Yung Aung) were caught red handed by the joint team of 6th Assam Rifles, 36 Bn CRPF and Tirap Police while collecting extortion from Dadam Village on the behalf of the banned underground outfit.

This apprehension has again exposed the extortion network of the banned outfits where the local population is being used in a nexus for collection of extortion money from TCL region and using the same in various nefarious activities against security forces. Both the over ground workers were involved in collecting extortion on the directions of hardcore insurgents of National Socialist Council of Nagaland- Khaplang (Yung Aung). In the recently concluded security meeting at Khonsa on 27 April 2022 the villagers pledged their support against insurgency and their timely information to the security forces has resulted in this apprehension.

A total amount of rupees Rs 40,000 extortion money was recovered from the Over Ground Workers by the joint team of 6th Assam Rifles, 36 Bn CRPF and Tirap Police.

Earlier also forty two over ground workers have been apprehended giving a huge blow to the underground outfits. This achievement showcases the commitment of Security Forces and Tirap Police to ensure peace, normalcy and safe environment in the region. This apprehension is likely to demotivate the underground outfits in utilising hard earned money of local population in their anti-national intentions.