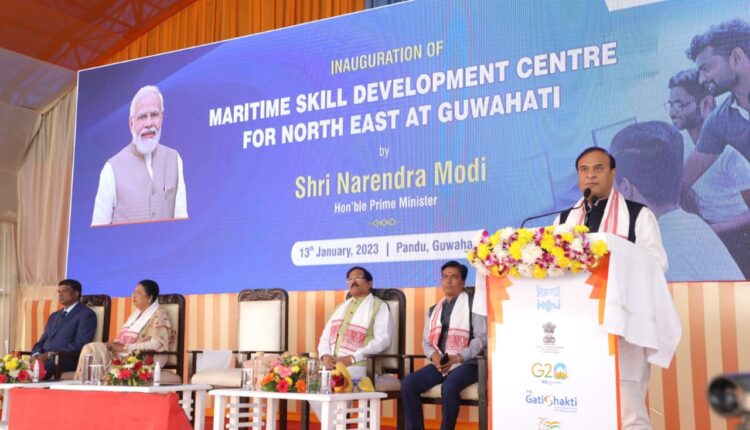 Assam Chief Minister Dr. Himanta Biswa Sarma on Friday attended from Pandu ghat in Guwahati the flag off of MV Ganga Vilas, the world’s longest river cruise, by Prime Minister Narendra Modi through the video-conferencing mode. Equipped with the state-of-the-art amenities, MV Ganga Vilas would cover a distance of 3,200 km between Varanasi in Uttar Pradesh and Dibrugarh in upper Assam traversing  Bangladesh in 51 days and enroute, make stop-overs nearby 50 major tourist sites for the guests to visit. These apart, the Prime Minister also inaugurated the Maritime Skill Development Centre at Guwahati which has been built at a cost of ₹6 crore and laid the foundation stones for a ship repair centre at Pandu and an elevated road connecting the Multi-Modal Terminal at Pandu with the National Highway 27 for which amounts of ₹208 crores and ₹180 crores, respectively, have been sanctioned.

Addressing the inauguration and foundation stones laying ceremony, Chief Minister Dr. Himanta Biswa Sarma expressed his gratitude towards Prime Minister Modi for the numerous initiatives under his leadership aimed at transforming the northeastern States into engines of growth and development in the country. Referring to the launch of MV Ganga Vilas as a game-changer in unleashing the true potential of the tourism sector in eastern India, Chief Minister Dr. Sarma said it would go a long way in realising Prime Minister Modi’s motto of “transformation of the Northeast through transportation”. The Chief Minister also appealed to tourists from across the country as well as abroad to come forward for the never-before experience MV Ganga Vilas would be offering.

The Chief Minister also exuded confidence the Maritime Skill Development Centre would ensure youths from the region would be able make use of the employment and self-employment opportunities the maritime sector would be providing in days to come. He added the upcoming ship repair centre and elevated road connecting Pandu port with National Highway 27 would be a huge boost to not only the riverine shipping sector in the region but would also contribute immensely towards its economic growth.

Earlier, there were talks of need for “mainstreaming of Northeast” in the power corridors and the intellectual circles but under the leadership of Prime Minister Modi, it has not remained a mere agenda but is being implemented in letter and spirit, the Chief Minister stated. Under PM Modi’s leadership, Northeast is witnessing unprecedented level of progress and growth on all fronts, he added.