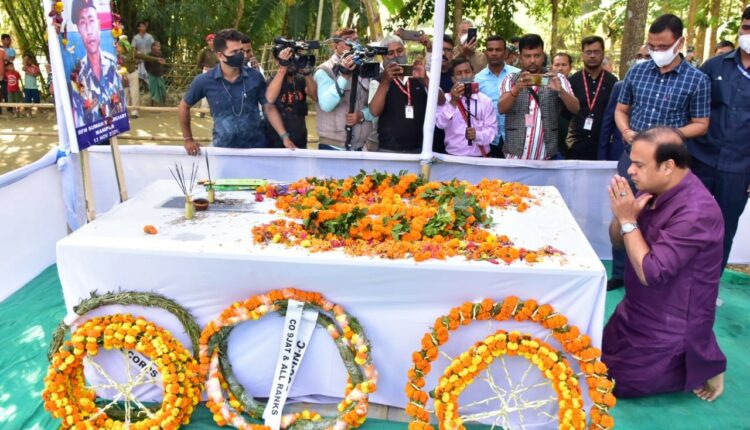 CM hands over cheque of Rs. 50 lakh to the family of the martyr

Assam Chief Minister Dr Himanta Biswa Sarma visited the residence of martyred Assam Rifles jawan Suman Swargiary at Thekerakuchi Kanhibari village of Barama in Baksa district today and met the family of the martyr. As per request of the local people, the Chief Minister asked the PWD Department to take urgent steps for construction of the road of the village. He said that the road will be named after the martyr. Chief Minister Sarma also said that a rural stadium will be built at Hirimba Bodo High School, where the martyr studied.

Suman Swargiary who was a rifleman of the Assam Rifles was killed in a militant ambush along with seven others including the commanding officer of the unit at Churachandpur district of Manipur on November 13. The Chief Minister placed a wreath at the portrait of the jawan and offered his tribute to the martyr.

Chief Minister Sarma also interacted with the family of the martyred jawan and conveyed to them his deepest condolences. He also handed over a cheque of Rs. 50 lakh to the family as a mark of honour to the great sacrifice of the martyr.

Necessary steps will be taken for educational upliftment in BTR: Pramod Boro