Completion within time and quality of embankments our top priority: Minister Pijush Hazarika 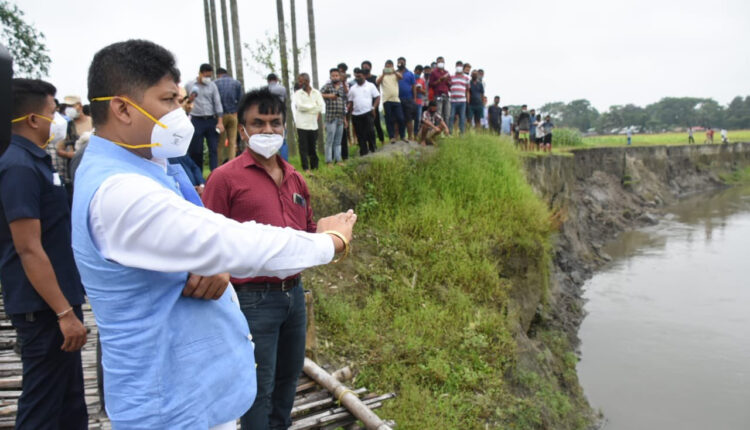 With monsoon round the corner, an alarming concern is the completion of embankment constructions across numerous locations in Assam. Numerous erosions have been reported in riverine areas of Assam recently leading to a situation of fear and chaos among the riverside-dwelling people.

Regarding the construction of embankments across Assam, Water Resources Minister Pijush Hazarika said “I have been saying two things; one is completion within time and the other, quality work. There will be no compromise regarding these”.

The mighty Subansiri has recently eroded a significant embankment area of Misamara village in Majuli. Local residents have appealed to the government for scientific solution and mitigation measures of the flood that affects the region year after year.

Residents along the embankments of Dikhou River in Nazira have alleged that the embankment was to be properly constructed last year; however, no work has been witnessed regarding the same.

The embankment along Jamuguri in Narayanpur is in extreme dilapidated condition. Project worth crores of rupees were taken up for the improvement of the embankment, however, the only visible work seen is that of some bamboo constructs to protect the embankment.

Mankachar too has been prey to the mighty Brahmaputra every year and this year, the havoc has already started. A local alleges that every year, concerned authorities wait for the last moment to take up mitigation measures and projects that leads to the failure to curd the impact of flood.

Dead body found floating in a pond at Barampur, brings sensation in the area