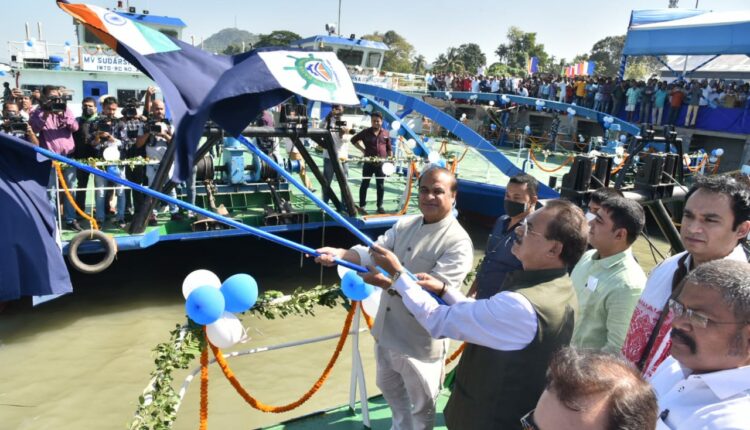 In a bid to transform the quality of inland water transport services in the state, Chief Minister Dr. Himanta Biswa Sarma flagged off four steel catamaran vessels at Pandu Port in Guwahati in the presence of Transport Minister Chandra Mohan Patowary today.

These vessels are launched under a World Bank funded project to integrate high quality passenger and vehicle ferry services into the state’s wider transport network system. Out of the four vessels, two will ply over river Brahmaputra at Majuli and one each in between Guwahati-North Guwahati and Uzanbazar -Umananda ferry ghats.

The newly launched vessels have the capacity of 100 passenger and 50 two wheelers and are powered with 180 HP twin engines which can go in a speed of 10 knots forward speed. The vessels can ply even the lower draft of 0.75 m and have got advance equipments such as control & monitoring, communication and navigation, GPS, eco sounder, wind measurement, lifesaving and firefighting equipment.

Coinciding with the occasion, Chief Minister Dr. Sarma also launched e-ticketing system for Umananda ferry service which will enable tourists to pre-book their tickets and thereby help in management of ferry operations.

Speaking on the occasion, Chief Minister Sarma said that the culture and civilization of Assam is nurtured by the Brahmaputra and Barak and their tributaries. However, these rivers also pose challenges in terms of communication for people living on both the banks; he said adding that government efforts are therefore underway to rejuvenate river transportation in the state.

The Chief Minister informed that the IWT department inked an MoU with World Bank, which has sanctioned an amount of Rs.770 crores towards realizing the state government’s effort for improvement of river transportation. Out of this amount, Government of India would refund 80% and the State government would bear the remaining 20%, he said.

Further observing that challenges bring opportunities, Chief Minister Sarma said that after the boat accident at Nimatighat, the state government took an aggressive approach to make river transportation more hassle-free and secured. Accordingly, steps are in progress to fit marine engine at 853 boats having single engine in the state. He also elaborated government steps taken to streamline ferry service post Nimatighat incident and plans for passenger movement between Majui and Jorhat during the ensuing Raas Festival.

Dr. Sarma moreover said that the state government is working to rejuvenate river transportation through technological intervention and under this initiative earlier e-ticketing system was introduced for Jorhat-Majuli and today it is introduced for Uzanbazar-Umananda ferry ghats. He said that e-ticketing system at Jorhat-Majuli ferry ghat has immensely helped to make the system transparent as since its launch on September 27, government has earned revenue to the tune of Rs. 26 lakhs. He further informed that shortly e-ticketing system will be launched for Guwahati-North Guwahati ferry service. The Chief Minister also asked the department to introduce the same for all ferry ghats of the state.

Transport Minister Chandra Mohan Patowary in his speech highlighted the steps taken by the department for improvement of inland water transport system in the state. He said that prior to Nimatighat boat mishap, 16 boats used to ply between Majuli and Jorhat. However, presently government efforts are on to increase the number upto 20. He informed that as of now, six government vessels and two private ferries are in operation at Majuli, besides fitting of marine engine on five boats are underway. Moreover, marine engine would be fitted in another five private boats that will ply between Johat and Majuli, he said. The Transport Minister also informed that the department would procure 5 Ro-Pax vessels and press 10 more catamaran vessels into service next year which are presently under construction.

Two arrested in Kokrajhar for allegedly attempting to kidnap a girl