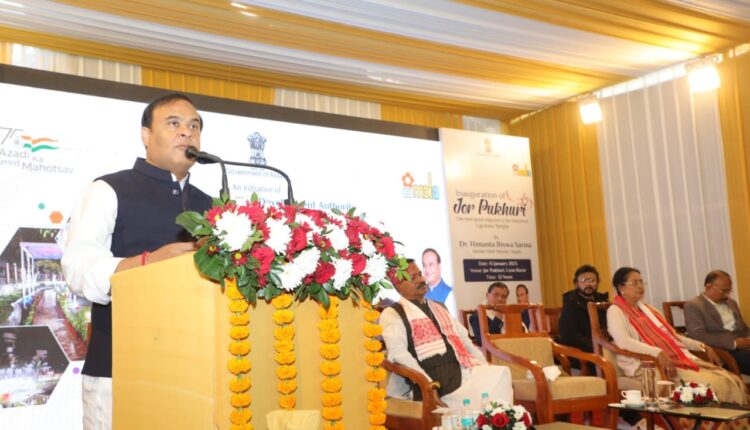 Speaking on the occasion, Chief Minister Dr. Sarma said that he was happy to inaugurate Jor Pukhuri Park at Uzan Bazar to make the twin ponds more attractive by sustaining the historical importance attached to it. He said that the pukhuri which was built centuries ago by Swargadeo Siva Singha is one of the heritage tourist destinations in Guwahati. Building the park, the government has enhanced the value of the place. He also said that the park will provide a refreshing experience to the visitors. In the coming time, State government will take more steps to transform Guwahati into a beautiful city fulfilling the aims and aspirations of the city dwellers.

Later, Chief Minister Dr. Sarma as a part of developing Guwahati into a smart city,  inspected Panbazar Construction site and took stock of the progress of the work. The project comprised development of old commissioner of police bungalow campus as an extension of Mahabahu Brahmaputra River Heritage Centre. The components of the project are integration of Mahabahu Heritage Centre with old CP Bungalow Complex, development of existing Padum Pukhuri Area, development of existing riverfront area and creation of terraces and development of landscaped courts and walking trails all around the area. Chief Minister Dr. Sarma while emphasizing on the timely completion of the project, stressed on the quality construction of the project. He also talked to the executing agency of the work and asked it make it an attractive one maintaining an common symmetry of the whole landscape.

Dr. Sarma also visited the site of Fancy Bazar Botanical Garden and took stock of the progress of its construction. He inspected all aspects of the construction and hoped that the first phase of the park can be dedicated in another six month time. He asked the GMDA to take care of the ancillary facilities and planting different species of saplings to make the place an attractive and unique one.