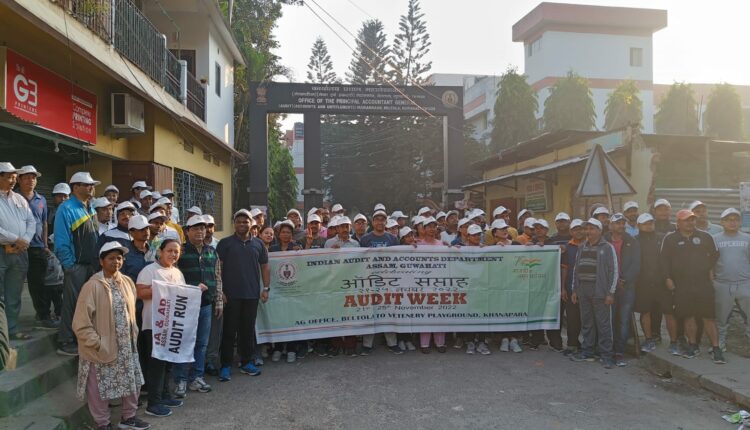 The Offices of the Principal Accountant General (A&E) Assam, Principal Accountant General (Audit) Assam, Director General of Audit, NF Railway and Director General of Audit (Central) in Guwahati, (Field Offices of the Indian Audit & Accounts Department (IA&AD) in Assam), and working under the aegis of the Comptroller and Auditor General of India (Supreme Audit Institution of India), celebrated AUDIT WEEK from 21st to 25th November 2022, which were a part of the ‘Audit Diwas’ celebrations, held in New Delhi on 16th November 2022.
Historically, on 16th November, 1860 Sir Edward Drummond took charge as the first Auditor General of India. Every year, the day is commemorated as ‘Audit Diwas’.

The objective of ‘Audit Diwas’ is to mark a day to celebrate the long and illustrious history of the Institution of the C&AG of India, its evolution, recognition of its contribution to governance of the country, re-affirmation of commitment to good practices, personal integrity, and high professional standards. It is also an opportunity to engage with stakeholders and communicate to the citizens of this country about the dedicated service of the IA&AD as a Public Audit Authority.

The week-long celebrations began with an Inaugural Function on 21st November 2022 in Shimanta Shankardev Kalakhetra International Auditorium, where S. A. Bathew gave the Welcome Address, followed by a brief history of the Department by Vinod C, Deputy Accountant General (Audit). Distinguished Guests/Personalities who attended the Inaugural Function were Rajib Sharma, former Deputy Comptroller and Auditor General of India, Mrinal Kanti Choudhury, former Vice-Chancellor, Tezpur University and Mukesh Sahay, former Director General of Police, Assam. All the distinguished guests also addressed the Inaugural Function and gave their views/opinions on the Institution of the Comptroller and Auditor General of India.

As part of the AUDIT WEEK celebrations on the inaugural day, there was an Exhibition of drawings made by children. During the course of the week, events like Debate and Quiz Competitions, Audit Walkathon, Outreach Programmes in different Educational Institutions, where Officers from the Department would enlighten students about Constitutional provisions of the C&AG of India, role of the Indian Audit & Accounts Department, Audit Processes and their outcomes in the democratic set up of our country, etc. were conducted. The AUDIT WEEK celebrations concluded on 25th November 2022 with a Prize Distribution Ceremony for winners of the various competitions.