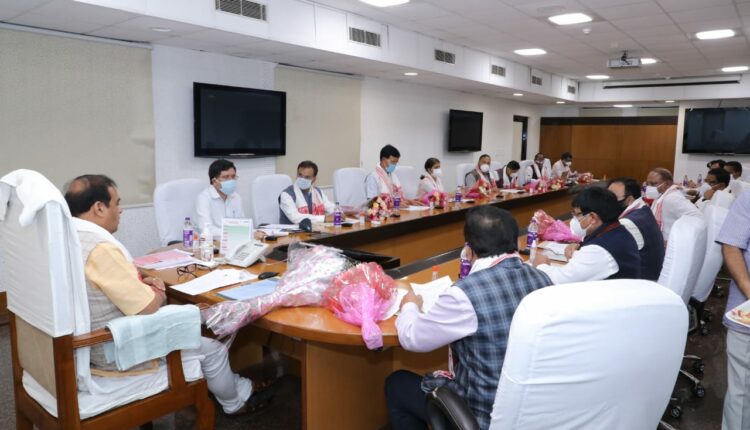 Chief Minister Himanta Biswa Sarma chaired the first cabinet meeting of the newly formed Assam government. In a first, it has been decided that regular cabinet meetings will be held every Wednesday between 11 am to 1 pm, which will be followed by a press meet.

Ministers Keshab Mahanta, Pijush Hazarika and political secretary to the chief minister, Jayanta Malla Baruah have been appointed as the spokespersons of the cabinet.

In today’s meet, after extensive discussion on the COVID-19 situation of Assam, it has been decided that every minister will be allotted two districts to take responsibility of the pandemic situation. The ministers will have to submit a cumulative report on the steps to be taken to tackle the pandemic situation of those districts within 3 days. A new set of standard operating procedures will be announced tomorrow, on 12th May.

Speaking to media, Keshab Mahanta said that if the pandemic situation continues and the government is compelled to extend the time limit of the new SOP beyond 15 days, then financial packages will be announced.

Further, the share of Assam government in the Numaligarh Refinery Limited is to be increased to 26 percent from the current 12.35 percent as the government has decided to invest a further Rs. 1687 crores into the PSU.