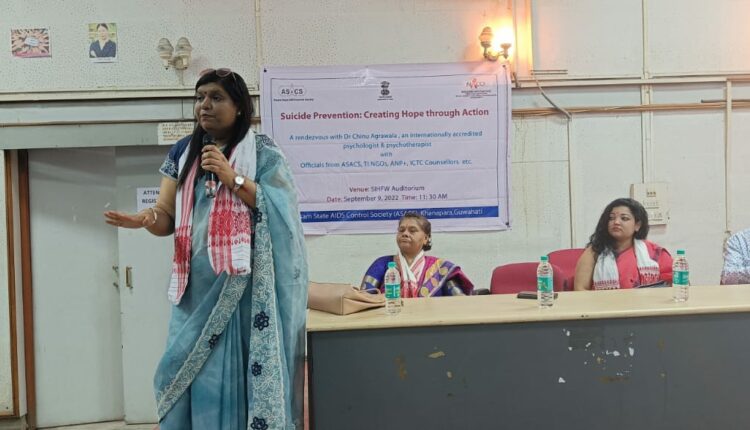 A special interactive session on suicide prevention and other related aspects was organised by Assam State AIDS Control Society (ASACS) on Friday at the auditorium of State Institute of Health & Family Welfare, Khanapara on September 9, 2022. The special session was graced by Dr Chinu Agrawal, internationally accredited Psychologist & Psychotherapist who presided over the session as the Guest Speaker.

The session was organised on the eve of World Suicide Prevention Day which is observed globally on September 10 every year to raise awareness among organisations, the government & the public about the stigma related to suicides.

Dr Chinu Agrawal, during her special address and interaction with the participants highlighted the data released by NCCB stating that 1,64,000 deaths happened by suicide in 2021 which is at par with the accidental deaths.

With this year’s theme of World Suicide Prevention Day being ‘Creating Hope through Action’, Dr Agrawal pitched on the fact that suicide is not the only option available to the difficulties of life. This year’s theme attempts to instil hope and brightness in all of us by serving as a reminder that there are alternatives to suicide.

Dr Agrawal stated that through our actions we may show those who are battling depression that there is hope and that we care about them and want to help them. Our positive hopes & actions can lead to a day when a world can be envisioned where suicides are not so prevalent, she stated.